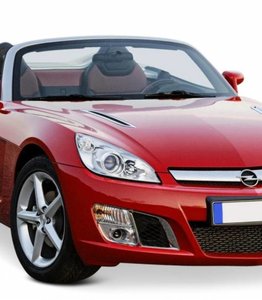 Due to an accident or, for example, vandalism, it may be necessary to replace your Opel GT windscreen. This iconic car has appeared in two generations, with no less than 34 years in between in which it was not made. Replacing a cheap windscreen is possible for both generations. Where you will often have to pay the main price at a brand dealer, we can keep the price considerably lower with after market car windows. In this article we will tell you more about the Opel company and the special history of the Opel GT. In addition, you can read about the production method of windscreens and how the windscreen replacement of your Opel GT is possible through us.

Opel has been a car manufacturer for almost 120 years

It was never the intention of founder Adam Opel to plunge himself into the car market with his company. Let alone that after 120 years the company would still be a major international player. Adam Opel grew up in Germany as the son of a locksmith and was destined to succeed his father. However, the young Adam came into contact with the sewing machine industry in Paris. These, for that time, complicated devices attracted his attention. Back home in Germany he started his own business in the barn of an uncle. Thanks to its excellent business instincts, Opel became the market leader in sewing machines within twenty years.

Meanwhile, Adam Opel married Sophie. The five sons of the couple soon became interested in cycling and competed throughout the country. Adam Opel saw this as an opportunity to make a living because of the passion of his sons and the possible high profitability of cycling. When Adam Opel died in 1895, he left a real empire to his family. The company he founded was the market leader in Germany in sewing machines and bicycles.

It was only after the founder's death that the company Opel began to intervene in the car market. Adam's sons and widow had the strings in their hands and enough power to afford this kind of experimentation. It turned out to be a good choice for the family, because in the car industry, too, Opel quickly grew into a superpower. The first models that rolled off the tyre from 1899 onwards were not yet a great success. By 1928, however, Opel had become the largest car manufacturer for the German market, with the highest number of exported cars.

Beginning and end of the General Motors era

The American General Motors gained a foothold in Europe with its own car brands, but only to a moderate degree. The modern production techniques and excellent sales figures of Opel were therefore very attractive to GM. As early as 1929, the company therefore bought 80 percent of Opel's shares. In 1931, the remaining twenty percent followed and Opel was wholly American-owned. This had many synergy benefits for all parties. This made it possible to sell rebadged versions of various models worldwide and to reduce research and development costs.

However, the fall in Opel's sales from the 1990s onwards prompted General Motors to sell its car brand. In the intervening years, major successes have been achieved, including with the:

However, since 2017, the Opel car brand has been owned by the PSA Group. This parent company also includes the French car brands Peugeot and Citroën and the Chrysler Europa branch. The goal is to make Opel once again the big player it has been for years.

It is important to make a direct distinction between the two different Opel GT models. The first version of this car is an iconic and very popular car, while the second version was not a resounding success. The first Opel GT was made between 1968 and 1973 and is the first real sports car of Opel. The beautiful shape, powerful engine and special details ensure that the car is still popular with collectors. The headlights are an example of the special design. These are pop-up headlights and the operation is only possible by hand. As a result, the joke was often made that Opel GT owners had a very strong right hand.

The production method of the Opel GT was also unique. The bodywork was made in France at Chausson. After that, it went on to another French company that took care of the interior, wiring, windows and chrome work. The car was then completed in Bochum, Germany. This complex construction ensured that the Opel GT, despite its great success, was not in production for so long. In fact, Renault took over both French companies in 1973 and, as a result, they could no longer be used by Opel.

More than 100,000 of the first Opel GT were sold all over the world. This contrasts sharply with the sale of the second Opel GT. This sporty convertible was launched in 2007 and sold up to and including 2009. With a total of more than 7500 copies sold, this was not a great success. However, despite the low sales figures, the car, like its predecessor, is beautiful to see. If you want to replace the car windscreen from this version, you can certainly count on us.

When to replace the Opel GT windscreen?

The windscreen of all cars is made of laminated glass. This consists of two layers of glass with a layer of PVB film in between. This film ensures that the car window will not break, but will crack in the event of an accident or vandalism, for example. A windscreen crack cannot be repaired, so if there is a multiple crack or a crack in the driver's direct view, replacement is required quickly. With a single crack out of the direct view of the driver you can still drive, but it is in any case advisable to have the windscreen replacement of the Opel GT. The disadvantages are, after all:

What does a windscreen replacement for the Opel GT cost?

You can only have car windows replaced by a brand dealer at a high price. This is because brand dealers have the exclusive right to sell branded car windows. As a result, they can largely determine the price themselves. This is of course for you as a car owner no favorable situation. Alternatively, you can order after market automotove glass from us. Replacing your Opel GT windscreen is therefore considerably cheaper. After market car windows of course have the same high quality as automotive glass with brand logo. However, due to the absence of the brand logo, non-brand dealers are also allowed to sell this automotive glass. The free market operation ensures lower prices and therefore an advantage for you.

It is also possible to order separate car windows through us and place them yourself. If you have the knowledge you need, you can save even more by doing the windscreen replacement for your Opel GT yourself. If you do not have this knowledge, our certified fitting partners will be happy to help you. They will also come to you on site to replace the windscreen. Simply order your new car window with or without assembly and get back on the road safely in no time at all with your beautiful car.