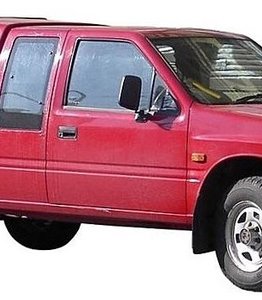 Although Opel's pickup truck has not been sold very much, it may of course be necessary for you to have a windscreen replacement for the Opel Campo. For example, an accident or vandalism can cause the windscreen to burst. Once it bursts, it cannot be repaired and the Opel Campo windscreen will inevitably be replaced if you want to get back on the road safely with your car. In this article you can read more about the products and possibilities we offer you. Before going into the details of replacing a windscreen for an Opel Campo, we will briefly dive into the special history of Opel. In particular, we talk about the many collaborations, rebadged versions and shared parts with other car brands within the overarching General Motors. This is an important aspect of the history of the Opel Campo as well.

The start of Opel as a sewing machine and bicycle manufacturer

Adam Opel started the company Opel in 1862. Although he was trained to become a locksmith just like his father, his interest was mainly aroused by the sewing machine factories he visited in Paris. He decided to start a similar plant in Germany. Within twenty years he was so successful that Opel became the largest and most important sewing machine manufacturer in Germany. Under pressure from his five sons, who were all great cycling enthusiasts, Opel started producing bicycles in 1886. When Adam Opel died in 1895, his company was Germany's market leader in both sectors. After his death, his widow and five sons took over the family business. Because of their interest in cars, the history of Opel as a carmaker began in 1899.

The first Opel cars and their acquisition by General Motors

Although Opel was appointed as a supplier to the court as early as 1907 by Wilhelm II, it was only in 1909 that the first car that became a relatively large commercial success appeared. The so-called 'Doktorwagen' was affordable, but still very reliable and therefore a big hit in the home country and surrounding countries. This success was well established and, from 1914, Opel became the largest manufacturer of motorised vehicles in the whole of Germany.

The success of Opel aroused the interest of General Motors. This American car company had not yet gained a foothold in Europe, but was already very successful in its own country. General Motors therefore decided to acquire Opel and in 1929 bought 80 per cent of Opel's shares for approximately US$26 million. The remaining twenty percent followed in 1931, leaving Opel entirely in the hands of General Motors. This had many advantages for both companies. The used techniques and developments of parts and even complete cars could be done together. In this way, a considerable saving on research and development could be achieved. Over the years, a very large number of similar cars have been brought onto the market by car brands belonging to the General Motors group. These included the following brands:

Parts sharing ensures, among other things, that the windscreen of an Opel can be replaced from time to time with car windows that also fit into models of other brands. This can cause the price to be even lower for you.

The Opel Campo as an example of cooperation between car brands

The Opel Campo is a fine example of a car that was cleverly re-badged under the leadership of General Motors and sold under various names in various countries. Although the Japanese car brand Isuzu was never fully owned by General Motors, the shares held by the American company were enough to launch a far-reaching cooperation. The history of the Opel Campo begins with the Isuzu Faster. This pickup was taken into production by Isuzu as early as 1972. In America this car was sold as the Chevrolet LUV, while in Australia exactly the same car was first called the Chevrolet LUV, then the Isuzu KB and then the Holden Rodeo.

In Europe, these first two generations of the Isuzu Faster were not yet sold, but this started when the third generation appeared in 1988. This generation was sold as the Isuzu TF in Europe and in 1988 also appeared as the Bedford Brava in the UK. In 1991 we finally arrived at the Opel Campo. This car was sold from that year on and is therefore a rebadged version of the long available Isuzu TF. In the UK, Bedford Brava was, by the way, sold as the Vauxhall Brava from 1991 onwards. This was before the rebadged cars of Opel and Vauxhall started using the same model names.

So, although the model on which the Opel Campo is based has a very long and successful history all over the world, the Opel Campo itself was not a resounding success. Opel had a difficult time in the 1990s and sales were disappointing. Moreover, the Opel Campo was not able to win the competition with the Toyota Hilux, Nissan Pickup and Ford Ranger, among others. In 2001 the pick-up was taken out of production and nowadays there are not many of them driving around. Therefore, if you need to have a windscreen replacement for your Opel Campo, it can be difficult to find the right one. Through us, however, you can easily and quickly replace a car window at a low price.

When should I have a windscreen replacement for the Opel Campo?

The windscreen of almost all cars is made of laminated glass. These are two layers of glass with a layer of PVB film in between. The two parts of glass are quickly heated and then slowly cooled, so that they are very strong. The intermediate layer of PVB film also ensures that the windows do not break up into thousands of pieces in the event of an impact, but only burst. These cracks cannot be repaired and therefore it is necessary to replace the Opel Campo windscreen as soon as it is cracked.

As long as you are dealing with a single crack that is not in the direct view of the driver, you can continue driving with it. However, a windscreen with a multiple crack or a crack in the driver's view should be replaced as soon as possible. The sun or light from oncoming vehicles and lampposts can reflect into the driver's eyes through the crack, causing glare. In addition, the stiffness of the windscreen is no longer good when there is a crack in it. This can lead to unsafe situations in the event of an accident.

Fortunately, we keep the cost of replacing a car window considerably lower than what brand dealers ask for it. This is because only brand dealers are allowed to sell branded car windows in the first place. As a result of this monopoly position, brand dealers often charge higher prices than necessary. Through us you can buy after market car windows of exactly the same high quality. It does not bear a brand logo and therefore also allows non-brand dealers to sell this automotive glass. The windscreen replacement of your Opel Campo is therefore much cheaper, because due to the free market the price of our products is lower than at a brand dealer.

You can also choose to order only your required vehilce glass through us and replace the windscreen of your Opel Campo yourself. If you have this knowledge in house, this is an inexpensive way to quickly get back on the road safely with your car. However, it is also possible to outsource the windscreen replacement of the Opel Campo to our certified partners. They will be happy to come on site at an equally favourable rate to replace your windscreen. So don't pay too much at other suppliers, but choose the highest quality at the best price and order your new Opel Campo windscreen today.