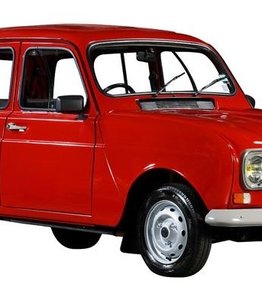 Cheap windscreen replacement of your Renault 4

More than 8 million copies were made of the Renault 4, a car that has been given an iconic status. In essence, however, the car was developed to win the competition in France, but Renault simply made too many mistakes for that, so that Citroën held on to the number one position without much effort. Nevertheless the Renault 4 is still very popular. If the windscreen of your Renault 4 needs to be replaced, you can visit the after market, where you can already find a new windscreen for € 119.

Before we go any further, we'll first look at this special model that has been given a very special advertising method.

The Renault 4, the just not-response to the 2CV

In 1948 Citroën launched the 2CV, a model that would take over the French market in no time at all. Renault was saddened to see it, and decided to study the model and form his own answer to it, in order to attract the French motorist back to them. The idea was to develop a larger car that could be used in the city. A noble ambition, but since it took Renault 13 (!) years to do so, the Renault 4, or the R4, only came on the market in 1961. The 2CV had already become synonymous with 'car' in France.

And it wasn't a really improved version either. The Renault 4 had only three gears, whereas the 2CV had been driving around with four gears for thirteen years. It was a bigger car, we can see this model as one of the first hatchbacks. Yet the Renault 4 in turn would become synonymous with simplicity.

The anti-advertising that made the car popular

The Renault 4 can be called iconic. But the way in which the model was advertised is now a lesson for marketers. The R4 was placed in the advertisements as a complete anti-car. For example, Renault placed: 'If you buy a car according to its appearance, you can stop reading', and 'The Renault 4: buy, drive, throw away'. It was a huge success. On the one hand because Renault remained clearly realistic at a time when manufacturers were presenting the buyers with golden mountains, on the other hand because an honest picture was given of the car itself. It was not an innovative feat, it wouldn't change the world and the neighbours didn't start drooling immediately. The Renault 4 was just... a car.

This was not entirely unique, by the way. When Volkswagen wanted to promote the Volkswagen Beetle in the United States, the advertising agencies saw that it was mainly muscle cars and large cars that were on the market. DDB therefore developed the slogan 'Think Small.’ Completely different from all other car advertisements, with a hard dot behind the slogan and a different font. The advertisers at Renault have taken this up strongly, also in the promotional films, which unfortunately can only be found in French and Spanish:

It seems that Renault realised early on that annoying advertising is the best way to be remembered by the consumer.

Some facts about the Renault 4

The Renault 4 had three gears, but got a fourth gear in 1968. The gear lever of all models is in the dashboard. The Renault 4 was a very stripped down and relatively cheap model, which made it a great success because the car was very popular all over Europe. However, there is a big disadvantage to the low price tag. The Renault 4 has gotten an iconic name over the years, but is now hardly to be found in good and original condition. During production, Renault decided to treat the materials as little as possible in order to save on costs. Do you have a Renault 4 in good condition or can you find an occasion where the ravages of time have not yet won the battle? Then you have a real pearl.

When should the windscreen of the Renault 4 be replaced?

The windscreen of a Renault 4 has to be replaced when the window damage in the windscreen is outside the legal limits. This is the case when the damage is in the driver's field of vision and this:

Continuing to drive with this glass damage is dangerous, because the incidence of light is reflected in an unpredictable way. The driver may be blinded while driving. The window damage in the windscreen also distracts while driving and reduces the view of the road, which is why the legislator has decided that it is not allowed to continue driving with this damage.

Can a Renault 4-windscreen be replaced cheaply?

Yes, on the after market a new Renault 4 windscreen costs only € 119. For replacement parts the after market is by definition a good place for Renault 4 owners. Because Renault has paid little attention to durability during production (buying, driving and disposing of a car), second-hand parts are not a strong choice.

Buying an after market car window is choosing the best value for money. Do you need to replace a car window and are you not insured for it? With the low prices on the after market, the new windscreen is probably within your budget.

What does a windscreen for the Renault 4 cost, including fitting and delivery?

A new windscreen for the Renault 4 (R4) costs € 119 without fitting or delivery, and € 219 including fitting on location somewhere in the Netherlands. For delivery and fitting in Belgium there is an additional charge of € 30. Our certified fitting partners will place each new car window within three working days at home, in the parking lot at the office, in the local parking garage or in any other place. We do not recommend replacing the car window yourself when it comes to windscreens. This requires more knowledge and experience than a side window replacement, which in most cases you can do yourself.

Does your Renault 4 need a windscreen replacement? Then there's a good chance that you'll want the best value for money, because you're careful with this iconic French model. With our after market windscreens for your R4, you can be sure that you won't pay too much and that the installation will be taken care of completely for you, when and where you want it.