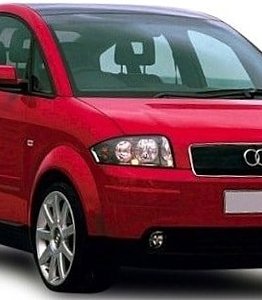 Cost of windscreen replacement for your Audi A2

The Audi A2 is one of the few models of the German carmaker that has completely failed. If a windscreen replacement is required for your Audi A2, you can still visit the after market. Despite the fact that less than 200,000 cars have been produced, you can find new windscreens for this model on this after market. This way you can save a lot of money. Before we discuss this further, we will look at this special type of Audi. Everything seemed perfect at launch. So why didn't it become the success that was predicted?

The Audi A2, unique, class and a surprising bonnet

The Audi A2 was presented in 1999 as a five-door half-combi. It is a type that originated from the concept car Audi AI2. The emphasis was on the lowest possible fuel consumption during development. For this reason, work was done to reduce the air resistance. Audi also decided to use as much aluminium as possible, so that the weight of the Audi A2 is more than 100 kilos less than the weight of an average other car of the same size. There are types of the A2 that weigh only 985 kilograms!

There was no new platform developed for this type. The A2 is built on the same platform as the Volkswagen Polo, the Skoda Fabia and the Seat Ibiza.

Audi then developed economical and above all efficient engines for this lightweight model to increase efficiency even further. The CO2 emissions of only 81 grams per kilometre were particularly attractive at the time of introduction, but the environmentally conscious aspect did not weigh as heavily at that time as it does today. The Audi A2 had another interesting advantage: this model is built with recycled materials as much as possible.

Audi made a very surprising choice. The bonnet of the Audi A2 can't just be opened. The entire bonnet has to be removed. You can fill up with liquids yourself with this type, but you don't have to remove the bonnet to do so. In the video below you can see exactly how this works.

A great model, but at the wrong time

This type could not be a success either. The Audi A2 was in fact considerably more expensive than the types that the competitors placed on the market in the same segment. This was mainly due to the use of aluminium, which resulted in a higher cost price. Audi produced less than 200,000 copies of the Audi A2. Competitor Mercedez-Benz A class was driven out of the factory more than 1 million times.

Another reason for the disappointing results was the design of the car. Audi's much-discussed model was not equally well received everywhere and many consumers immediately saw problems with a bonnet that had to be completely removed without any hinges. Partly because of this, only 3,500 models of the A2 were sold in the Netherlands.

The engines in the Audi A2

The engines in the Audi A2 were of course also aimed at minimal fuel consumption. That's why Audi borrowed the 1.2 TDI from the Volkswagen Lupo with 61 hp and economy all around: no power steering, no climate control, tyres with the lowest rolling resistance and an engine with start-stop function. The result: consumption of 2.62 litres per 100 kilometres during the Nordic Eco Run in 2003. Only 6,500 copies of the Audi A2 with the 1.2 TDI engine from the Lupo were produced.

The other engine offerings included the 1.4 FSI petrol and 1.4 TDI diesel, both with 75 hp. Audi later introduced a 90 hp diesel engine and a 110 hp 1.6 FSI petrol, probably to make the car look more like an Audi again.

The Audi A2 was taken out of production in 2005. Audi itself indicated that it would resume production and it has been reported on several occasions that production will be resumed, because the demand for more economical cars is now at its highest level. Whether this is on the A2 is questionable, especially since we now also see models like the Audi A8 with the SpaceFrame technology that Audi can build on much more easily.

When does the windscreen of my Audi A2 need to be replaced?

If there is a car window damage in the driver's field of vision, then the Audi A2 windscreen needs to be replaced. Even with branched cracks outside the driver's field of vision, the car window replacement is necessary. If another car window is smashed in on your Audi A2, look at the side or rear windows for an Audi A2. As the windscreen is made of laminated glass, it will not be smashed as quickly as the hardened side and rear windows of your car.

Can I replace my Audi A2 windscreen myself?

If you are not a car mechanic or have no experience with windscreen replacement, you cannot do it yourself. Replacing a side window is a completely different story, because on the Audi A2 it is simply mounted in a window mechanism. On the other hand, the windscreen must be mounted in the right way to prevent it from coming loose and leaking. Replacing the windscreen is also a lot more work because of the size of the window itself.

If you are a car mechanic (or perhaps you have your own garage), you can also order the Audi A2 windscreens from us without assembly. You indicate this yourself during the ordering process. This way you can assemble the attractively priced windscreens for your customers.

Why are after market windscreens for the Audi A2 cheaper?

Simply because there is no brand logo on it. The windscreens are made in the same factories and the quality requirements are exactly the same. However, due to the absence of the brand logo, the price of a new Audi A2 windscreen is much lower. This is practical, because with the scarce production of the Audi A2, finding a second-hand car window is a difficult job.

With our after market windscreens for your Audi A2 you can be sure that you are opting for quality, attractively priced and always placed by an certified mechanic.

Replacing the windscreen of your Audi A2 just this week?

Would you like to replace the windscreen of your Audi A2 this week? If you place an order today, we will ensure that the new windscreen is placed within three working days. This way you can get back on the road safely with one of the most special models Audi has ever made.

Can't find what you're looking for or do you have a question? Please contact us via chat, phone or mail.