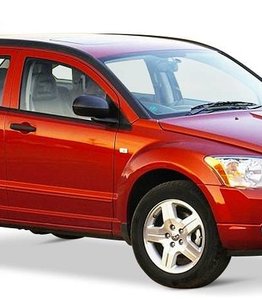 Windscreen replacement of your Dodge Caliber

More than 49,000 Caliber copies have been sold in Europe. If the windscreen replacement of your Dodge Caliber is necessary, looking for a brand dealer is not an attractive option. Fortunately, there are plenty of affordable windscreens for this model on the after market. This is the model with which Dodge wanted to enter the European market, via the middle segment where many strong competitors had top models. To what extent did Dodge manage to get its feet on the ground in Europe, and how cheap is such an after market windscreen?

The Dodge Caliber: an American car for the European market

The Dodge Caliber saw the light of day in 2007 and became the replacement for the Dodge Neon and the Chrysler PT Cruiser. In five years time, 400,000 copies were produced, with various adjustments to match the model to the demand in Europe. The introduction in Europe was not really successful. In Sweden, for example, the distributors waited no less than two years, because there was no particulate filter or ESP in the diesel cars. As a result, the road tax was more than € 600 higher than the tax for the Volkswagen Golf, for example.

This was the direct competitor in the C-segment, where the Dodge Caliber was placed. To save on costs, the Americans used a lot of plastic in the interior and all modern features were removed from the car. In this way the Dodge could be offered at an attractive price, but it was no longer an attractive car. It would never be a real challenger for the powerful Golf that dominated the C-segment.

The construction of the Dodge Caliber

Although the Dodge Caliber is called an American car, a lot has been borrowed from car manufacturers outside America. The basis of the car is the GS platform that was set up in cooperation with Mitsubishi and the engines are four-cylinder from Volkswagen. Striking, because Chrysler-Dodge already had the diesel engines of Mercedes at its disposal.

Dodge immediately put a huge amount of effort into marketing. It wanted to enter the European, Chinese and Australian markets with this type and tried this with advertisements such as:

Fortunately, money was also spent on commercials of a slightly higher level, in which the car itself is involved, or at least not... This advertisement had to persuade the South Africans to choose the Caliber:

The first model of the Caliber was the SE model. It has front-wheel drive, no air conditioning, no central locking and no extra mirrors. The color of the grille is painted in the color of the car to save even more on costs. The rev counter is also missing and many of the options for the Caliber were not available for the SE models.

These models were equipped with considerably more standard features, such as air conditioning, a drink cooler, central locking and folding seats. For Europe, this model was standardly equipped with a 2.0 turbo diesel (from Volkswagen).

The SRT4, the most equipped model of the Dodge Caliber

The SRT4 is a hatchback that had to compete with the Volkswagen GTI and the Mazdaspeed3. The 19 inch rims with five spokes, stronger engines, satellite radio, special brake discs, everything was pulled out of the case to make a special number. Unfortunately a lot less attention was paid to the standard versions that could have taken over the market.

The sales success in Europe?

More than 49,000 copies of the Dodge Caliber were sold in Europe, making it the most popular Dodge model on the continent. Still, we can't really speak of a sales success.  In the peak year of 2007, almost 17,000 copies were sold. More than 435,000 models of the Volkswagen Golf, the direct competitor in the C-segment, were sold. Nevertheless, a sales figure of 49,000 in Europe is an excellent result for an American car manufacturer.

When should the windscreen of your Dodge Caliber be replaced?

The windscreen of your Dodge Caliber must be replaced when the window damage no longer falls within the requirements of the national road traffic agency in the Netherlands (RDW). This could be a branched crack or an asterisk in the field of vision of the driver with a diameter greater than 20 millimetres. If the asterisk is not in the field of vision, it may have a maximum diameter of 50 millimetres. The windscreen damage then remains - for the time being - within the legal framework, but of course it is by no means attractive.

Can I replace my car window of the Dodge myself?

A car window replacement by yourself is perfectly possible with side windows. Replacing a windscreen, however, is a job for the specialist. An incorrectly fitted windscreen can come loose during abrupt braking and can leak in annoying places, causing moisture damage.

If you want to save on costs, replacing a Dodge Caliber windscreen yourself is not a good plan. What is a good plan is the use of cheap car windows. Not second-hand automotive glass, but after-market car windows that have the best value for money and that are simply brand new.

Is buying after market automotive glass a wise decision for a Dodge?

After market automotive glass is not only a cheaper option when you want to buy a car window. It's also choosing high quality, because these windows come from the same factories as your Dodge/FCA dealer's branded glass. After market automotive glass alone does not have a logo on the window, which means that it can also be sold outside of the dealer's premises, which makes a significant difference to the price.

In addition, buying a car window is much easier if you choose this option. You select online the windscreen you need for your Dodge Caliber (there is only one variant of € 229) and indicate whether you want to order it with or without installation.

You no longer have to look for the brand dealer of the American car and do not have to make time to come to the workshop. Our certified fitting partners come to your home or on location to replace the windscreen of your car.

Replacing the windscreen of your Dodge Caliber: easy and cheap online

It couldn't be easier to replace your Dodge Caliber windscreen than via our website. You can immediately see what the costs are and how competitive the price of the new windscreen for your Caliber is.

Can't find what you are looking for or do you need help finding the best option for your car? You can reach us easily by phone or live chat. We will be happy to help you find the best car window for your car.