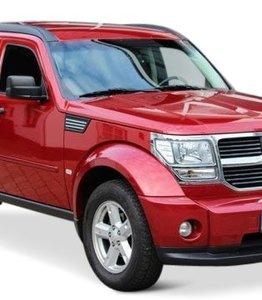 Windscreen replacement for your Dodge Nitro

The Dodge Nitro is an impressive sight on the European roads. If your Dodge Nitro need a windscreen replacement, it can be difficult that this is an American car that has to pull the European market in the direction of Dodge. Fortunately, nowadays you can easily find car windows online at attractive prices, especially on the after market. Before we look at this, the question is whether the Dodge has been able to win over Europe with the Nitro - and why this can never be the case.

In the 1960s and 1970s, American car manufacturers such as Dodge and Pontiac were saddened to see how European car makers became active in their markets. Dodge, Pontiac and also Chevrolet sat down at the table to protect their own market and to sell more models in Europe. For Dodge, this was never really an important item on the agenda. First Dodge was safe under the flag of Chrysler, then it joined forces with Daimler and by definition had its feet on the European soil.

But the collaborations came to an end. In 2007, Dodge was all alone again (until 2014). It immediately realised that it had to acquire more market share in Europe in order to maintain a strong position in the car market. The Dodge Ram Pickup and Van were sales successes in America, but lost it to Ford and GM at home. These models became popular in Europe, but the desired market share was never achieved. Dodge had to change something and set to work - to then print a 100% American SUV on the European market. Because it never really fitted.

The second compact SUV from Dodge

The Dodge Nitro is a compact SUV from Dodge and the first one saw the light of day in 2007. It is not Dodge's first SUV. Earlier the Raider was already on the market, but in 1990 the production of this model was stopped. The Nitro is built on Chrysler's KA platform, which is also used for the Jeep Cherokee (which is called Jeep Liberty in North America) - both models were assembled in Toledo.

The model has standard rear-wheel drive. Four-wheel drive was initially optional, but would eventually become standard for the European market. Although different versions were made, the sales figures never reached 300,000. Partly thanks to very bad advertising, especially in the Netherlands. The advertisers came up with a slogan 'charged with adrenaline' and showed a dog that was electrocuted when touching the front wheel of the SUV...

Although the film was removed as soon as possible after storm tides of criticism, the internet is merciless:

Commitment to Europe fails despite all efforts

Dodge has listened to the criticism and feedback. The four-wheel drive no longer became optional, but standard. In America the Dodge was only delivered with petrol engines, but for the European market diesel engines (with particulate filter) were developed for this model to better meet the demand. This 2.8 litres was specially manufactured in Italy, but this too could not save the model which nevertheless showed a CO2 emission of 222 grams per kilometre.

The Dodge Nitro did not last long. Already in December 2011 Dodge decided to pull the plug, because the disappointing sales figures showed no reversal after adjusting the models for the European market. In Europe just under 19000 models of the Nitro were sold. This is downright ironic, because the Dodge Caliber and Dodge Journey sold considerably better, while Dodge did not focus with this on the Europeans.

When should the windscreen of your Dodge Nitro be replaced?

The windscreen of a Dodge Nitro should be replaced when there is windscreen damage in the driver's field of vision that does not fall within the guidelines of the national road traffic authority (which is called 'RDW' in the Netherlands). In concrete terms, this means that the windscreen replacement must be carried out in the case of asterisks in the driver's field of vision with a diameter greater than 20 millimetres or branched cracks.

This law has been drawn up because it is unsafe to drive with window damage in the field of vision of the driver. Incidence of light (sunlight or the lights of oncoming traffic) breaks into cracks and chips in an unpredictable manner, which can blind the driver while driving.

Can I replace the windscreen of a Dodge Nitro myself?

Unless you are a car window technician, you cannot replace the windscreen yourself. Replacing a car window yourself is possible when the side window of your Nitro is broken. A windscreen or rear window replacement of a Dodge Nitro is more work and this needs to be done accurately to avoid problems.

An incorrectly fitted windscreen can come off during heavy braking and lets moisture get into the car in places where you don't notice it in time. Having the windscreen fitted to your Nitro is so advantageous that it's always a good choice. This can be arranged within three working days at your home or on location, so that there is always a solution that fits your schedule.

How much does it cost to have the windscreen of a Dodge Nitro replaced?

Finding the right windscreen for a Dodge Nitro is a piece of cake. There are no different sizes. All models from 2006 to 2010 received the same windscreen from Dodge. But finding a brand dealer is difficult, while it also charges high prices because there is a brand logo in the automotive glass.

The brand logo doesn't do anything for the automotive glass. It only ensures that only the brand dealer is allowed to sell the glass. After market car windows do not have a brand logo and can be sold anywhere. You don't have to worry about the quality, because this glass is made in the factories where branded windows are also made - and the requirements are identical.

Do you have any questions about the car windows or our service? Talk to us via the live chat or call us, so we can help you choose the right car window for your Dodge.