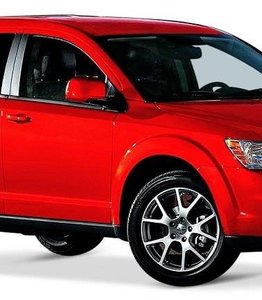 Windscreen replacement for your Dodge Journey

The Dodge Journey is a striking European model for the American carmaker. With more than 20,000 sales in Europe, the windscreen replacement of the Dodge Journey is not difficult. The availability on the after market ensures that you can quickly and easily find the right car window, especially since the Fiat Freemont has exactly the same windscreen. Why has this model become one of the biggest successes in Europe for Dodge, and how is it possible that the windscreen is shared with a Fiat model?

The Dodge Journey - or the Fiat Freemont if you like

Dodge has had a turbulent period at the beginning of the millennium. In this period it released the Journey in 2009, a medium crossover that was produced without modification until 2011. In 2009, however, Fiat took over 20% of the shares in Chrysler (and would immediately expand this as well). The result was that the Dodge Journey would be marketed in some countries as the Fiat Freemont.

In Europe, the Dodge Journey would not be replaced until 2011 by the Fiat Freemont, a model that is 'based' on the Journey. In fact, it's just the Journey with a facelift, also available as a 7-seater. The fact that Dodge was able to sell more than 20,000 models before the name changed says a lot about the success of the model. By the way, Fiat decided not to bring the Freemont to the Netherlands, but to all surrounding countries.

Why did the Fiat Freemont never come to the Netherlands?

Fiat decided never to market the Freemont in the Netherlands, because according to the management this type could never be a success because of the tax system. The heavy and greedy car would simply become far too expensive for the end user and that is why the type was put on the market all around us and not in the Netherlands.

The first examples of the Dodge Journey

The Dodge Journey was shown to the public in 2007 in Frankfurt. The Journey has the same platform as the Dodge Avenger that is slightly modified. The standard version of the Journey was a 5- or 7-seater with a four-cylinder engine, just like the minibuses Chrysler made in the past.

In the middle of the 2009 model year, a striking change was made. The name of the model and the emblem were moved to the right on the tailgate, so that the brand logo was no longer used. In 2011 it would become clear why.

The facelift of the Journey

In 2011, a facelift was carried out for the Journey. New lamps, adjustments to the grille, better suspension and steering and a new logo that had to replace the old logo. As the Dodge Nitro was taken out of production in 2012 during the merger with Fiat, the Journey became the smallest SUV that FCA has to offer.

In 2013 some minor adjustments will be made, such as 19-inch rims, but in 2014 the big change will come. The Journey Crossroad will be on the market, with chrome accents and above all a much tougher look.

What is the difference between the Fiat Freemont and the Dodge Journey anyway?

To see what the real difference between the models is, all we have to do is look at Brazil, China or Australia. Both types were marketed there. The Freemont has only been released as a 2.0 and 2.4 litre four-cylinder model, except in China. In these countries the Journey is only sold with the Pentastar V6 engine.

Speaking of Australia: many of the advertisements for the Dodge Journey were stale, with mainly technical information that didn't really appeal. In New Zealand it was therefore decided to shoot a completely unique advertisement, which you will not easily forget:

When should the windscreen of the Dodge Journey be replaced?

The windscreen must be replaced when there are cracks in the window. Also cracks or asterisks with a diameter of more than 50 millimetres are not allowed according to the national road traffic agency in the Netherlands (RDW). If the car window damage is in the field of vision of the driver, the requirements are stricter. An asterisk may then have a maximum diameter of 20 millimetres.

If you decide to continue with this windscreen damage, this does not only mean disapproval at the MOT, it also means more risk while driving. Light can be reflected in unpredictable ways by window damage, which can blind you while driving.

Where can I find a Dodge Journey car window?

Buying a car window for a Dodge Journey is easier than you think. Despite the fact that this model was only offered in Europe for a few years, there are more than enough possibilities to be found on the after market. This will save you a lot of time and money. Ordering a new windscreen for your Dodge online takes less time than finding a Dodge dealer near you. In addition, the car window replacement at home or on location is also possible with our mobile service.

You also save considerably on costs. The brand dealer only has brand glass with a logo in the windscreen. This logo does not affect the performance of the windscreen, but it does ensure that the price is considerably higher than the price of after-market automotive glass.

Can I then install the window myself in my Dodge?

A side window replacement is not difficult, especially when you have the time and space to do it quietly. It is much more difficult to replace a windscreen. Firstly because the size of the window is much larger and secondly because fitting a windscreen is an accurate job. If the windscreen is not tightened properly, it can come off during abrupt braking and there is a risk of leakage if it is fitted incorrectly.

However, if you are a car mechanic or garage owner, you can simply order all windows without installation. In addition, you can just pick up the car window from us in Tiel to save even more on costs.

Replacing the windscreen of the Dodge Journey is done in no time at all. You select the right windscreen, indicate whether you want this without or with installation and delivery and the order is ready. Within three days, our certified fitting partners ensure that the windscreen is installed in your Dodge.

Are you unable to find a solution or would you like us to take a look at it with you? Please contact us via live chat or telephone. We will be happy to help you find the windsceen you are looking for.