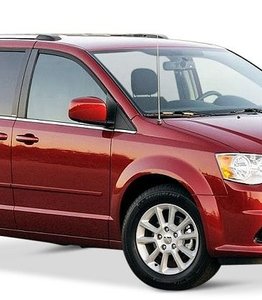 The Dodge Grand Caravan: made by five car manufacturers?

There are few models that have more than one manufacturer. There are even fewer models that have more than two manufacturers on the list. But the Dodge Grand Caravan is the crowning glory. During the many takeovers in the tubular period at Dodge, the Grand Caravan just went along with the new merger every time. This results in a list of five names:

And the real joke? The original idea wasn't introduced to Dodge at all. The actual design was presented to Henry Ford II (Ford Motor Company), who didn't like the idea for the minivan at all. Sperlich and Iacocca, both active at Ford, went to Chrysler and took the prototype with them. Here they had ears for the bus, which would be born in 1983. The first models were launched in 1984.

The first generation of the Dodge Grand Caravan

The Dodge Grand Caravan is built on Chrysler's S-platform, but the low entry is due to the borrowing of elements from the K-platform. The Dodge Caravan was immediately placed on a busy market, where the (Chrysler) Plymouth Voyager and Renault Espace would also compete for market share.

Chrysler did make a note in the history books. The Dodge Caravan and the Plymouth Voyager are the first mass-produced cars with built-in cup holders. A record to be proud of.

The real bouncer of the Dodge Grand Caravan compared to the standard version of the Caravan (which has nothing to do with a caravan), was the extra space. This is clearly reflected in the advertisements that Dodge made for this model, like this older version from 1993:

The second generation of the Caravan models

In 1991 the second generation was started, which would only last until 1995. This new generation included child safety seats as a feature, as well as an airbag on the side of the driver. This would be the first minivan to meet the requirements set by the U.S. government in 1998.

In 1996 the third generation was started. It had to be, because the market shifted more and more to a flexible demand with especially shorter wheelbases. That's why the Dodge Caravan became possible with... just about anything. A short wheelbase, an extended wheelbase, eight different power trains, 3- or 4-door and all that on the same platform. This generation, together with the Plymouth Voyager, would win several prizes, which is not surprising with the time and energy that Dodge/Chrysler has put into this model.

In 2000 the fourth generation was introduced, with a longer body and adapted headlights and tail lights. The Mitsubishi 3.0 litre V6 was removed from the engine package because it no longer met the requirements and was replaced by the 3.8L. A striking change was made in 2002, when Dodge removed the logo from the doors, as the brand did on all cars.

The fifth generation: only the Grand Caravan

Since 2008 Dodge has only made the Grand Caravan, the short wheelbases have been removed from the offer of the Caravan. The fifth generation is characterised by much more luxury, such as a MyGIG entertainment system (with hard disk recording function), easy-to-adjust seats and better airbags.

The Dodge Grand Caravan in Europe

The Dodge Grand Caravan was also marketed in Europe from 2007 to 2011 under other names, such as Chysler Grand Voyager (Ireland and Great Britain), and Lancia Voyager in the rest of Europe. These variants do not have the same equipment standard as the American models.

Since this is only about the equipment, the windscreens of the Dodge Grand Caravan, the Chrysler Grand Voyager and the Lancia Voyager are simply identical from the 2007 model onwards.

How do you find the windscreen that fits your Dodge Grand Caravan?

A model built under different labels and with different names and types. It's not easy for you when you need a car window replacement. Fortunately, the names and wheelbases are the biggest differences between the types. But that doesn't make it easy to find the right brand dealer.

Fortunately this is not necessary. The brand dealer only has automotive glass with an unnecessarily high price. You can save a lot on costs by looking further. Not a second-hand car window, because with the brand logo it is often still more expensive than the alternative with the best value for money. After market automotive glass is glass with the best quality and at the best prices. For example, a new windscreen for a Dodge Grand Caravan costs less than € 200 on the after market!

Of course, this does not only apply to the windscreens. Also the costs for rear window replacement are lower when you choose after market glass, just like when looking for new side windows.

Is it advisable to replace the windscreen of your Dodge yourself?

No, it is not. Only car mechanics and experienced specialists can assemble car windows in the right way within a short period of time and with a guarantee that you can count on. In this way, you prevent the car window from coming loose during abrupt braking and the risk of leakage due to incorrect installation is zero. And that's a good idea when your Dodge Grand Caravan will last for years to come.

Cheap replacement of the windscreen of your Dodge Grand Caravan

Do you need to replace the windscreen of your Dodge Caravan and do you want to find the best value for money, because quality is at least as important as price? Then you have come to the right place. You can easily order the new windscreen via the website, with or without installation and including or excluding delivery.

Can't find what you're looking for or would you like us to help you find the best solution for your Dodge? Talk to us via the live chat or call us: we are ready for you.