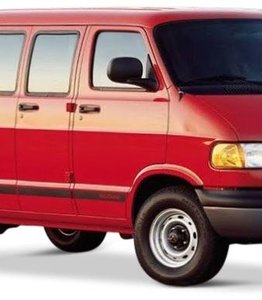 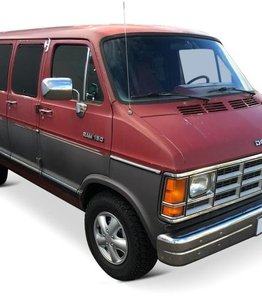 The Dodge Ram Van has been in production for 33 years, without any major or striking modifications to the model. This can be seen immediately if you need a windscreen replacement for your Dodge Ram Van, because there are simply not that many different car windows. Yet this truck has been a huge success, and there are still many people who drive one of these cars. How is it possible that a model could be produced for so long without many modifications, and why is this model so attractive to so many people and companies?

The first line of the Dodge Ram Van is already known for the different names given to the types. The Tradesman models were all identical. The Sportsman models had side windows for the passengers, which were missing in the other models. By the way, it was the very first model in America in which 15 people could sit. The direct competitors initially left this market behind, until Ford also introduced a 15-seater in 1978. General Motors even waited until 1990.

In the first eight years little changed in the Ram Van. The grille was modified and in 1978 the Maxivan of the Dodge Ram was resized, with a windscreen curling around the corner for better visibility while driving.

The second generation from 1979 onwards

The second generation was introduced to the market in 1979. No new platform, big changes and certainly no exciting features. The cheaper models were given round headlights where the more exclusive models got rectangular headlights. Also the grille was adjusted again, but the rest of the body remained the same. How striking this is? Special, because from 1971 to 2003 the frame would remain completely identical, while Ford and General Motors would carry out two or three complete platform updates in the same period.

And that's where the appeal of this Dodge model lies. Companies with larger fleets in America, installers and construction companies saw endless possibilities with these models. Interchangeable parts, a huge after market to adapt the cars to your own wishes: it was possible because all models had the same dimensions and features. Instead of buying new cars, Dodge's Ram Vans were simply modified.

This also had consequences for the people who wanted to use the Dodge recreationally. Easy to adjust and standard dimensions: that invites you to turn the six-metre-long Dodge into a motorhome. And we still see these models - albeit less and less - a lot during the holiday periods. Not only in America, but also in Europe. And yes, if you wish, you can even make a complete house of it and travel through America:

Before this model was taken out of production, Chrysler, as owner of the Dodge brand, made a few changes. In the '88 model, for example, the dashboard and panelwork were replaced by the modern options that were already in use in other Chrysler models at the time. In 2003 this legendary type was taken out of the production lines anyway. The Dodge Ram Van was succeeded by the Dodge Sprinter.

In 2012 it was decided to launch a new version on the market, this time from FCA (Fiat Chrysler Automobiles) itself. However, the RAM 1500 (without 'Dodge', although that often goes wrong rather than good) failed enormously on the European market. This enormous ship (six metres long and more than two metres wide) has a 5.7 litre capacity that almost literally keeps the fuel gauge moving. And this at a time when electric driving and environmental requirements predominate in the field of mobility.

And the 'point of sale' that this animal can pull 3.5 tonnes without any problem has also become obsolete. The Volkswagen Amarok V6 can do the same - but without this being directly related to consumption. Nevertheless, the 'Ram 1500 5.7 V6' leads the sales lists in the Netherlands when it comes to pick-ups, although this is a relatively small market in the meantime.

When should the windscreen of a Dodge Ram Van be replaced?

Do you have an older type of the Dodge Ram Van in mind to purchase, but has this car windscreen damage? Or are you looking for new car windows because your Ram has window damage? Then it is good to first see where the damage is located. According to the Dutch national road traffic authority (RDW) you may have windscreen damage in the field of vision of the driver, but only when it concerns a single crack or a star with a diameter of no more than 20 millimetres.

If you have an asterisk in the windscreen with a diameter greater than 50 millimetres, the windscreen must always be replaced. Also in case of branched cracks, it is mandatory to replace the windscreen of the Dodge Ram Van.

How can I cheaply replace the windscreen of my Dodge?

Cheap windscreen replacement of your Dodge is not possible when you go to the dealer. The dealer only sells branded glass. Finding a brand dealer for Dodge in Europe is by definition already a challenge.

A second hand car window can be an interesting option, especially when you look at the price. However, there is one option that is even cheaper, and that has a better price/quality ratio. Of course we are talking about after market glass.

What does a new windscreen cost for an Ram?

What does a car window cost on the after market? A lot less than at the brand dealer. Some examples of the options:

You can order the windscreens without installation and you can even choose to pick them up from our installation partners. If you have little or no experience with fitting windscreens, we strongly recommend that you make use of our Installation service.  Our certified assembly partners usually install the windscreen within three working days, on site or simply at your home. You can then be sure that the windscreen has been fitted correctly and, of course, there is a guarantee on the windscreen and the installation.

Cheap replacement of the windscreen of your Dodge Ram Van

Does the windscreen of your Dodge Ram Van need to be replaced because you are going to make a road trip, because it is a business van or because your pick-up needs to look as good as new? Then you can do this at attractive prices with after market automotive glass.