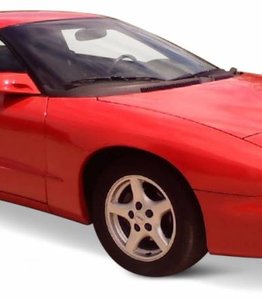 Windscreen replacement for your Pontiac Firebird

Few car models have achieved the iconic status of the Pontiac Firebird. If you need a windscreen replacement for your Pontiac Firebird, you'll want to get it done as soon as possible, and quality is of paramount importance. But that doesn't mean you want to pay the highest price. With after market automotive glass you have the best value for money and you can replace the windscreen within three working days. Before we go into this in more detail, the Firebird itself is given the space it needs. Because if you take the lead in Knight Rider as well as Smokey and the Bandit, you deserve to be in the limelight.

No introduction does justice to the first three generations of the Pontiac Firebird. This 'pony-car' is one of the powerhouses that did cross the ocean, along with the Ford Mustang and the Chevrolet Camaro (the Firebird's direct brother). Greedy, heavy and a road holding that is perfect, until you want to make a turn. But most of all, a car made before the strict environmental legislation came into force, allowing the 7500cc V8 to roar like an American muscleman should.

The first generation: actually an alternative instead of a dream car

Pontiac wanted to be big in the '70s. The idea was to design a car based on the Banshee concept (the XP-833), but General Motors wouldn't allow that. The company was afraid that this would compete with the Corvette and steal its own bread, which the Americans didn't think was a tight plan.

As a consolation, Pontiac was allowed to use the F-platform that General Motors had developed for the Camaro. In 1967 the first model of the Pontiac Firebird would roll out of the factory. The same year that Ford decided to upgrade the Mustang, so the competition could really break loose. The name 'Firebird' doesn't come out of the blue. General Motors used the name for the concept cars that were developed in the 50s and 60s.

The Pontiac Firebird Trans Am

The most striking appearance in the entire line was the Pontiac Firebird Trans Am Performance. The Trans Am models are the faster and better equipped versions of the Firebird and much attention has been paid to this. This line was always equipped with a V8 engine, where a normal Firebird had four or six cylinders. Only in 1989 a Trans Am was built with a V6 engine. This was borrowed from the Buick models of that time.

In 1970 Pontiac started the second generation of the Firebird. This version had heavier engines and was equipped with a huge number of extra packages.

Nevertheless there were 'only' four basic versions:

In 1979, the real success of the Firebird came. This had everything to do with the appearance of the model in Smokey and the Bandit, in which the car of Burt Reynolds was given a prominent role. The film became a success, but the car even more. The black Trans Am with gold stripes attracted the attention of the car lovers, who went to the dealer en masse to discuss the possibilities.

The third generation: without distinctive headlights

The third generation was born in 1982. It was a bit of a swallow for the fans. The characteristic double headlights were not taken with them and that was immediately noticeable. But thanks to KITT, the talking car in Knight Rider, this model also received a lot of attention.

The third generation, however, was mainly characterised by the oil crisis. The American powerhouse had to meet new requirements. Less weight and a lower fuel consumption. After much deliberation General Motors opted for a better aerodynamics and a lighter weight with better engine technology in order to lose as little power as possible. A success, because the third generation of the Pontiac Firebird was the first pony-car to perform well within the new standard.

The fourth generation of the Firebird leaned more heavily on consumption and weight reduction. Because of this, Pontiac has created models that hold their own on the road, but that let the hearts of the collectors beat a little less hard. Nevertheless, a lot of versions and features have been released and these cars are also heavily tinkered with by fans of American sports cars.

How does a car become even more legendary when it already has an iconic status? General Motors has the answer. You bring back an iconic model after the manufacturer no longer exists (after all, Pontiac has been discontinued), and you create a new Trans Am from the base frame of the Chevrolet Camaro, before launching only 77 models of the 'Bandit Edition Trans Am', all with the signature of the bandit (Burt Reynolds) himself. And that's what it looks like:

When should the windscreen of your Pontiac Firebird be replaced?

Windscreen damage is particularly annoying, especially if you have a collector's model, or if you want to keep your Firebird in a particularly good condition. The car window replacement is not always mandatory in case of damage. Chips in the field of vision of the driver with a maximum diameter of 20 millimetres are legally permitted in the Netherlands, for example. Just like single cracks.  A crack in the windscreen outside the driver's field of vision may even have a diameter of 50 millimetres.

But that's not what you want when you drive a Pontiac Firebird. And at the same time, you don't want to pay the price your dealer will charge you. Fortunately, there's an alternative.

New windscreen for your Pontiac Firebird from after market automotive glass, is that possible?

New windscreens at the dealer are expensive. Especially now that Pontiac itself no longer exists. The high price is mainly due to the brand logo, which ensures exclusivity and reserved sales rights. If you choose after market automotive glass, you will see cheap car windows that do not have a brand logo. However, the requirements for the vehicle glass are the same and these windows are often made in the same factories as where the brand glass is manufactured.

Can I order a Pontiac Firebird windscreen without installation?

Our certified assembly partners will visit you at home or on location within three working days to replace the windscreen of your Pontiac Firebird. At attractive prices and of course with a guarantee, so that you can fully enjoy your American dream car again.