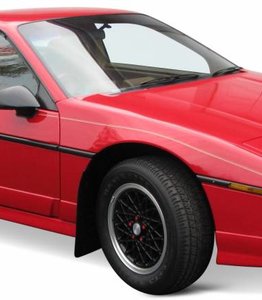 Windscreen replacement for your Pontiac Fiero

The story behind the Pontiac Fiero is downright bizarre and the reason for the popularity of this model. Should the windscreen of a Pontiac Fiero that you have in mind be replaced? Then this is no reason to let the deal go. The windscreens at the brand dealer are heavily priced and finding a brand dealer is not easy. However, if you opt for after market automotive glass, you will have a new windscreen in your Pontiac within three working days. Before we look further at this, it is high time to go into the bizarre genesis of this special model.

The story starts with the board's reluctance to make a two-seater Pontiac. Earlier, the idea of developing a Banshee concept car was rejected, after which Pontiac opted for the Firebird. General Motors didn't want to make a two-seater, because this would compete with its own Corvette, which had a strong market share.

However, a group of young developers sat down at the table and designed the new car in 1978. The board agreed, but only because the car was presented as an economical car for commuters who just happened to have two seats. Perhaps not a convincing pitch now, but just after the oil crisis and the disappointing results at General Motors during the recession it was music to the ears of the management.

It wouldn't be a muscle car at all. General Motors also immediately indicated the budget for the development of the car. A paltry 400 million dollars. A pittance, that normally would never be enough to set up a complete model. Unless you choose Aldikacti, the name that has become immortal thanks to the Fiero.

Yes, we owe the Pontiac Fiero entirely to a Turkish immigrant

Hulki Aldikacti was a Turkish immigrant employed by Pontiac. His experience and stubbornness made the idea into the final Fiero. He had to make huge sacrifices. He wanted to work with plastic panels, but had to choose metal because the budget was not enough to paint the plastic. He also had to choose the Iron Duke, a four-cylinder engine developed by GM. A much too heavy and in hindsight too big engine, so the oil tank had to be made smaller.

Three times the plug was removed - only Aldikacti didn't

The management of General Motors saw the developments with regret and decided to pull the plug on the project three times. Aldikacti refused, supported by a number of big names on the board, including Hoglund, who took over Pontiac in 1980. In 1983, the Fiero saw the daylight.

Problems with the model soon surfaced

When a car manufacturer keeps his hand on the purse and forces developers and makers to use parts that are not made for the car, things go wrong. The Iron Duke I4 engine caused a tragically slow start of the car and the tyres, brakes and suspension were taken over from the cars on General Motors' X and T platforms, where only mediocre mid-sized cars were made.

It wasn't surprising that the press was soon negative about the Fiero. Poor road holding, unsafe and above all terrible performance of the engine that was simply not made for a sporty car with a centrally placed engine.

Management sees the potential - too late, of course

In the years after 1983, small adjustments are constantly being made. It was not until 1988 that the car was thoroughly planned to be tackled. Suspension was developed for the model itself and a special engine was introduced that was suitable for the Fiero.

The 1988 model was the most popular. The new parts (which were already available in 1983, but for which there was no money), were finally implemented.

This Fiero is faster, better on the road and above all considerably faster. Also the dealers often cooperated with the customers and it was possible to get extra parts for certain models, as this collector shows with his second Fiero from '88:

Unfortunately, Pontiac was never able to build in the planned supercharger and DOHC engines because General Motors pulled the plug on the project in 1988, because sales were disappointing. And yes, General Motors owes that entirely to itself. With the right budget and the support of the management, this could have become one of the best cars on the European market from America. Despite the fact that it is a two-seater.

When should the windscreen of your Pontiac Fiero be replaced?

Models of the '88 Pontiac Fiero are very popular. If you find a car window damaged, this does not mean that you have to walk away immediately. On the contrary, because window damage is not always disapproved. If the asterisk is less than 20 millimetres in diameter in sight of the driver or if it concerns a single crack, the national road traffic authority ('RDW') in the Netherlands, for example, will approve this.

All other variants of windscreen damage are rejected. But even small chips or cracks will immediately weaken the iconic look of the Fiero. However, if you have had to invest heavily in the Fiero, then cheap car window replacement is the only option. And that is possible, even without having to consider second hand options!

Are there after market car windows for my Pontiac Fiero?

Yes, they are available from € 280 and you can order them directly online. Since the windscreen of the Fiero has never been adjusted, there is one model for all models from 1984 to 1988. Buying a car window becomes a lot more fun thanks to the possibilities on the after market. There is not much difference with the brand windows of the dealers.

A brand window has a logo in the glass, but this logo doesn't do anything for the window itself. It makes sure that the car windows are much more expensive. After market automotive glass is the option if you are looking for cheap car windows without compromising on quality. The requirements for the glass are the same. Often these after market car windows are even made in the same factories as the branded glass.

Can I replace the windscreen of my Pontiac myself?

If you are looking for a manual to replace a windscreen, you certainly cannot. It would be wiser to leave this to the experts. They know exactly how to install the windscreen, so it won't come off when braking abruptly. If the windscreen is fitted correctly, you also have a warranty and there will be no leakage of moisture into the car.

You can simply order the windscreens for the Fiero without installation if you are an experienced professional. In all other cases, our certified assembly partners are ready to install the new windscreen for you within three working days. At your home or just elsewhere on location.

If your Pontiac Fiero needs a windscreen replacement, you can arrange it today within a few easy steps. Can't you find the windscreen for your Pontiac or do you have questions about the working method or a certain product? Please contact us so that we can help you immediately by finding the right car window for your car.