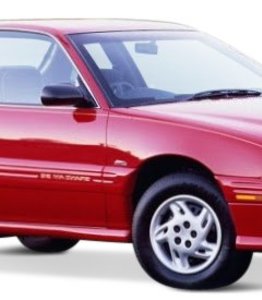 Windscreen replacement of a Pontiac Grand Am

We owe the Pontiac Grand Am to the Germans

The Pontiac Grand Am would probably never have existed without the Germans. Not that they helped with the design or building. No, the Pontiac Grand Am is the answer of General Motors to BMW and Mercedes that entered the American market in the eighties. The American car market had roughly two options. Luxury cars without sporty elements or sporty cars without any form of luxury. There was no middle ground for the American car manufacturers. And that was exactly what Mercedes and BMW came to introduce.

In the hope of protecting the market share, Pontiac came up with the Grand Am. A cross between the Pontiac Trans Am and the Pontiac Grand Prix, a model that would be 'right in between'. This car is therefore also referred to as the 'just-not' luxury car. But things went wrong very quickly. The Grand Am was launched on the market in 1973. And during the oil crisis that same year, the average American decided to opt for fully economical or fully luxurious cars. The Pontiac Grand Am was actually neither. However, more than 43,000 cars were produced, in the first year alone.

In 1974 Pontiac also battled with the Germans in the slogan: 'The mid-sized Pontiac with Foreign Intrigue... American Ingenuity' headed the brochure of the new Grand Am. This model had a different back, because the 1973 model no longer met the new safety requirements. However, this model completely failed, partly because of the oil crisis and the recession in America. A little over 17,000 models were built.

Pontiac proved to be more stubborn than the recession itself

Pontiac decided in 1975 to try again. This time with a model that uses unleaded fuel and with a wider range of engines to convince customers. As there was still a crisis and the recession had only just reached its peak, the customers of course stayed out. A little over 10,000 units were built, which only contributed to the iconic status of this type.

The road to the current type

From this point on, Pontiac decides to weaken the iconic model and make it more of a passenger car. The type of 1978 was already clearly undressed and in the years that followed, little was changed until 1985. In that year Pontiac picks up the Grand Am to replace the unpopular Phoenix. The new Grand Am was placed on a four wheel platform (on which the Buick Somerset was also built). A year later Pontiac added a sporty SE-trim version to the range and a sedan version of the Grand Am.

With minor modifications, the American continues to exist and to linger until 1992. In that year, the design was revised and the modern model was more easily recognisable. This one looks more like the first generation than all the types that have been made in the meantime. However, it is still looking for Pontiac. A facelift, several modifications including more engines, it could not save the model. In 1999 Pontiac would try again with a new type. This would be followed by the G6 coupé, with which Pontiac would eventually make the last cars in the long history of this brand.

Would you like to see the long history again, but in 5 minutes with beautiful pictures? There you go:

When should the windscreen of your Pontiac Grand Am be replaced?

You don't have to replace the windscreen in a hurry in case of car window damage. If you have a chip in the driver's field of vision with a maximum diameter of 20 millimetres, the national road traffic authority in The Netherlands (which is called RDW) allows you to continue driving with it. However, large asterisks or branched cracks in the driver's field of vision are always rejected. The car window must then be replaced as soon as possible because safety is at stake. After all, the driver can be blinded while driving if light is reflected in an unpredictable way.

However, if you have an iconic Pontiac Grand Am and you want to make it look as good as possible, or if you have safety high on your newer Grand Am, the car window replacement is by definition a good choice in case of window damage. This does not always have to be as expensive as you think.

How can I cheaply replace the windscreen of a Pontiac Grand Am?

Cheap car windows seem to be a lesser option, but that is not the case when you choose after market automotive glass. The big difference with the car windows at your brand dealer consists of two parts. First of all, brand glass has a brand logo and after market glass does not. The second difference is of course the price. Because after market glass does not have a brand logo and this glass can also be sold by parties who are not a brand dealer, the price of the automotive glass is many times lower.

So you do not compromise on quality, you only choose a lower price. Since this vehicle glass can be installed within three working days by our certified assembly partners, you can be sure that you will also receive a warranty on the installation of the new windscreen for your Pontiac.

Do you need a car window replacement and are you not insured? Then after market automotive glass is an attractive option. With this glass the replacement of the car window is very affordable.

Can I replace the windscreen of my Pontiac myself?

If you are not sure whether you can do this, the answer is guaranteed no. Replacing the windscreen of a Pontiac or another car is a job that has to be done by the experts. This way you can be sure that the windscreen has been fitted correctly.

Are you a car mechanic and would you like to order a new windscreen for a Grand Am? Then you have come to the right place. With us you can also order separate windows without installation, so you can fit the window yourself for your customer or your own collectors item.

Cheap windscreen replacement of your Pontiac Grand Am

If the windscreen of your Pontiac Grand Am needs to be replaced, then after market automotive glass offers you the best value for money. Our assembly partners can usually install the new windscreen within three working days, at your home or on location.

If you can't find what you're looking for or if you have any questions about our products or services, please contact us via live chat or call us so that we can look directly with you for the best solution for your Pontiac car windows.